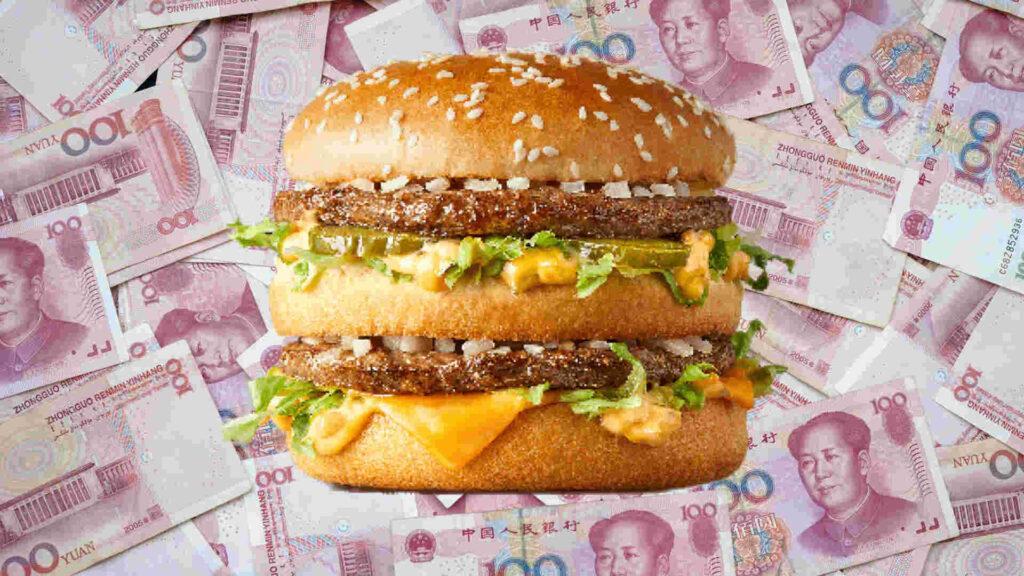 Anyone who pays attention to the world of crypto knows all too well how a few Tweets from Tesla CEO Elon Musk can sway the price of a coin. Musk’s latest attempt (and veritable success) to drive up the price of Dogecoin may have sent the Shiba Inu memecoin up by 8% after already sealing its considerable value by accepting it for payments at Tesla. However, the practical, tangible integration of cryptocurrencies has got a long way to go to catch up to China and its digital renminbi.

Dogecoin Big Macs Are A No-Go Despite Musk’s Dreams

Dogecoin is crashing, and not even promises from Elon Musk look like they can save it. On Tuesday, February 1st, Musk tweeted that he would eat a Happy Meal from McDonald’s live if the company would start accepting DOGE for fast food payments. While it’s highly unlikely that Dogecoin will be rebounding anything more than 8% from the Tweet, China’s e-CNY, on the other hand, has made it possible for Chinese citizens and certain foreigners to take a bite of a Big Mac bought with digital currency right now.

The Limited Ways To Spend DOGE

The only way that Dogecoin holders can tangibly spend their crypto without liquidating their digital assets and cashing out to a bank account or spending another large tether currency like BTC or ETH online is to procure a BitPay card. This US-only Bitcoin debit card added support for Dogecoin, which means that cardholders can spend their DOGE anywhere that MasterCard is accepted.

While a wonderful platform for American crypto holders, Bitpay only processes an approximate $1 billion in annual transaction volume. That’s nothing compared to the $8.3 billion worth of transactions raked in by the digital renminbi during the last six months of 2021 and a fraction of $18 trillion in transactions a year reported by China’s largest mobile payments firm Alipay in 2020.

Introducing The Digital Yuan And its Massive Number Of Practical Uses

As a federal digital currency intended to replace the Renminbi, the digital yuan isn’t plagued by limited use like the rest of the world’s cryptocurrency coins and tokens. The mammoth transaction volume is ongoing and on the rise despite the digiyuan being available in twelve select pilot locations only. Furthermore, foreign spending is locked to a minuscule amount of visitors attending the Winter Olympics and is truly inconsequential to the tally.

Pilot Cities Only But Widespread Adoption

China is pulling out all the stops to roll out the digital yuan to the whole of its populace but is in no hurry. Even the Olympics is a testing ground of its own. There have been national lotteries dispersing millions of digital RMB to lucky Chinese citizens. Alibaba, Tencent, and WeChat have joined the effort by accepting E-CNY mobile payments. Despite a national rollout date being lacking, China’s central bank digital currency is surprisingly versatile in its practical uses so far. McDonald’s China is just one of the 270 locations where digital renminbi wallets can be used for payments in Shanghai alone. That’s a massive selection of restaurants to choose from.

Mobile payments through Alibaba Group Holding means that Chinese citizens can order groceries and fast food from the second-largest player in the country’s on-demand market, which has over 3 million delivery drivers employed. e-CNY Wallet holders can also order from Tmall supermarkets who stock food, cosmetics, beverages, and snacks with a 1-hour delivery service offered, as well as Hema Fresh stores supplying the delivery of fresh groceries.

The People’s Bank Of China Puts e-CNY Into Circulation

There is very little chance that the Chinese digital yuan will be anything other than a massive success. The currency is in healthy circulation thanks to a selection of 200,000 “red packets” containing $31 worth of digital yuan each that can be won in the aforementioned national lottery. There are few digital currencies that can compare to the accessibility of e-CNY. All that it takes to activate a digital wallet and e-CNY exchange services as a Chinese citizen is to be a member of one of seven commercial banks or two online banks, namely WeBank from WeChat Pay and MyBank from Alipay.

Only those in the twelve cities and areas approved will be capable of signing up to use the e-CNY app, but from there, buying currency, spending, and exchanging digiyuan couldn’t be easier. Qualified users can buy digital yuan and pay for approved goods and services using their phone. They can also exchange e-CNY for goods and services on-the-spot by touching phones and thereby making use of NFC technology on their mobiles to complete the transaction.

No matter what you’re buying or selling in any of the areas that the digital RMB has been rolled out in, digital trading is made easy and instant, putting tangible purchasing power with fiat currency value into the hands of the people. Elon Musk once called Dogecoin “the people’s crypto,” but The People’s Bank Of China is busy showing the world what it is really like to have countless real-world markets open up to the people on a digital front.