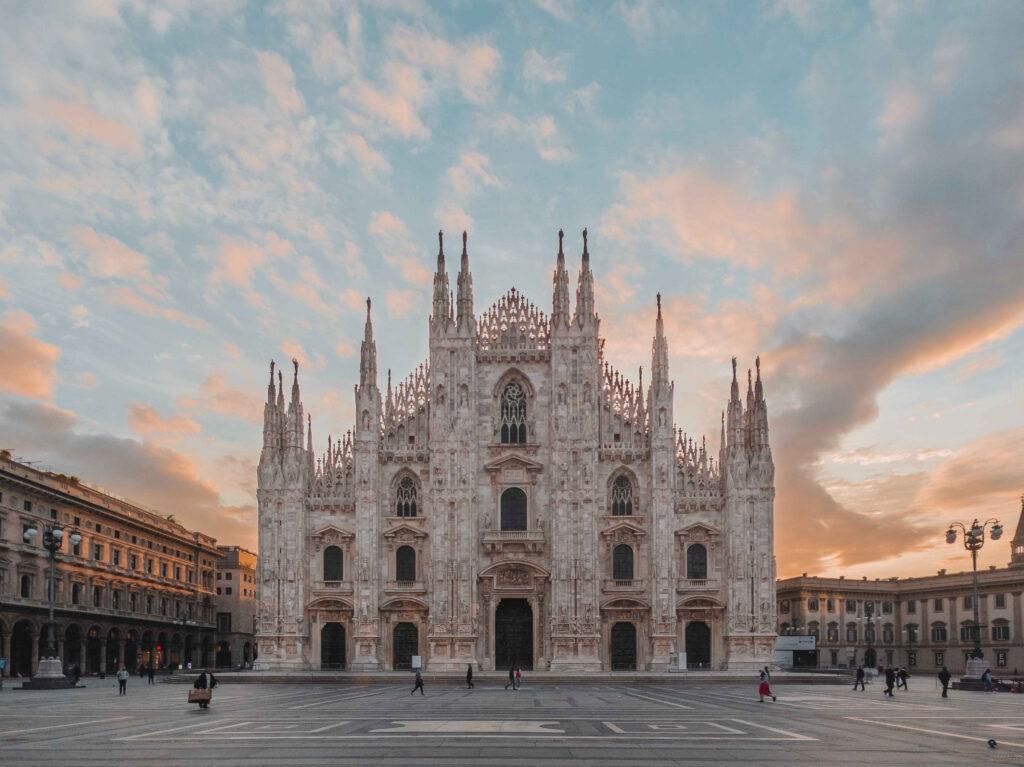 The luxury industry as a whole has greater pricing power and an ability to withstand inflation more than almost any other sector. At the heart of trendsetting fashion and quintessential high-priced luxury are a handful of global brands, so many of which are situated in Italy’s financial hub and commerce capital, Milano. Last year brought the resurgence of extravagant assets, and 2022 is carrying this momentum well. Here is a look at five of the best potential Milan fashion and Italian luxury brands for traders to consider over a short to mid-term period.

Family-controlled Prada announced forecasts for the upcoming year in November of 2021. During the first investor relations day since 2014, the fashion giant set a sales target of $5.1 billion while aiming at a 20% operating margin for 2022. If Prada’s plans pan out, e-commerce sales will double. The company racked up 27% growth over 2020, and all signs point to a complete 180° on the severely lacking online sales infrastructure previously inherent to Prada. In 2021, total group revenue totalled $3.64 billion, which was 40% better than 2020.

Now that Prada has suspended all of its Russian retail operations as of Sunday 6th, a dip in share price is likely. On Monday 7th, following Prada’s suspension of Russian trading, shares were seated at 38.75 HKD. The median price objective across 22 opinions of 61.56 certainly allows quite a lot of room for growth, and Prada is estimated to be growing at 309.11% per year for the next five years. We agree with leading forecasts – Prada is definitely a buy for traders interested in investing in Milan’s luxury sector, and any decline in the current price could be a keen opportunity to snap up stock.

Salvatore Ferragamo’s revenue grew by 31.4% in 2021, which placed its revenue at $1.22 billion for the year. The growth matched industry forecasts. To kick off 2022 with excellent momentum, Ferragamo’s licensing deal with Inter parfums Inc. that will last for ten years switched into full swing after having begun in October of 2021. The deal marked a significant change for Ferragamo’s beauty sector as management was reserved to company executives alone for the last twenty years. The change appears to be working well, as, in the last quarter specifically, revenues rose 20.8% as compared to the same period in 2020.

Unlike most luxury groups of its calibre and capitalization, Ferragamo hasn’t reached pre-COVID levels, let alone shown signs of exceeding sales targets. Salvatore Ferragamo S.p.A. was trading at 14.85 EUR on March 7th, which doesn’t give it too much room for growth given the median analyst price target of 19.09 with a low 15 and a high of 23. Even if SFER.MI performs in accordance with estimates; it is still trading at a marginal distance away from the March 11th, 2020 trading price of 15.70, while the brand at the same time has to be hell-bent on revitalization and transformation in order to stay competitive. Don’t expect massive gains but rather a stable investment that’s slowly but steadily on the rise.

French and Italian ski wear and luxury fashion brand Moncler released its fourth-quarter report and performed far better than anyone expected. The company is well-above pre-COVID levels after having grown by 30% in the last quarter and 44% for 2021 in total. Moncler’s rebound has been one of the strongest out of the Milan luxury sector. Total sales revenues tallied $2.28 billion, beating analysts’ forecasts by $290 million, and Moncler took home $433 million in net profit.

Moncler has an exciting 2022 ahead, which could lead to another year of the company smashing its own projections and analyst price objectives. It is both Moncler’s 70th anniversary and the recently acquired Stone Island brand’s 40th anniversary coming up, and the company is sure to have plans to leverage the events. As of March 7th, Moncler SpA stock was trading at 42.97 EUR, which is just 36% away from its median analyst price objective of 67.77. Even if MONC only reaches the low forecast at 44.86, that’s still decent growth for a luxury brand that’s only just beginning to abandon fur (zero fur from 2024) and address sustainability & animal welfare concerns.

Italian-French luxury eyewear and eyecare brand EssilorLuxottica SA has shown its stability and is rebounding well for two months into 2022. The Ray-Ban manufacturer has maintained a ‘Buy’ rating since March 2021, when shares were trading around the $134.50 level. Today, as of the second week of March 2022, EL opened at $135.80 and has been trading within a 52-week range of $128.95 to $195. While fluctuations are fairly stable, the company purchased the VistaSì chain in Italy on March 2nd, 2022, which added 99 stores and 75 Grandvision locations to the company’s banner. Only time will tell what the broadening of one of the already biggest optics distribution and eyecare networks in the world will bring.

While there’s no questioning the multinational corporation’s ability to withstand volatility, EL stock is trading with a huge Price to Earnings ratio of 45.02 as opposed to the ultra-low PE ratio of close competitor, Oakley, of just 4.44. It is certainly not a cheap stock but a return on investment, even if meagre, is almost guaranteed. Investors should keep in mind that EssilorLuxottica has such an all-encompassing market share that analysts are confident that competing eyewear company Warby Parker could triple their market share without it making the slightest difference to the luxury brand at all. Given the recent acquisition and rebound of global industries, ExilorLuxottica may end up surprising us all this well before the end of the year.

The Milan-based luxury footwear and leather goods brand Tod’s S.p.A. owned by Diego Della Valle & C. S.A.P.A had suffered declining sales for five years straight before obliterating forecasts with a massive leap in sales of 40% for 2021. Although shareholders are awaiting the full disclosure of fiscal 2021 on March 10th, in the last quarter of the year, sales rose by 41.6%, which put Tod’s total at roughly 10% before the pre-pandemic level. The luxury leather leader saw its share price leap over 12% immediately in lure of the news. At the beginning of week two of March 2022, TOD opened at 34 EUR and was trading with an average price objective from Wall Street analysts of 45.63, with a low of 30.50 and a high of 57.

Given the recent breakthrough in revenue and growth, many investors are wondering whether Tod’s can repeat the feat and outperform estimates again. After all, the firm was expecting a loss of roughly $11 million instead of reporting second-half profitability that’s well above 2019 levels, as divulged by a leading Jeffries equity analyst. We’ll all have to wait until March to find out just how profitable Tod’s was, but investors do know from the preliminary report that revenues exceed $963 million for the year – a comparable figure to the $1.237 billion in revenue reported by close competitor Salvatore Ferragamo for 2021. Investors should consider this a clear indication of just how quickly Tod’s is gaining market share. We feel that TOD is a pretty safe bet as an investment set to reach its forecast, with a good potential to surprise investors before 2022 comes to a close.