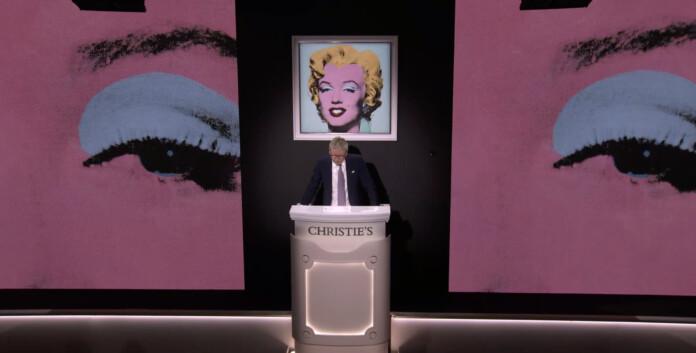 Modern art lovers around the world know all about Andy Warhol and his famous paintings.

Perhaps the most beloved of Warhol’s works is his portrait of Marilyn Monroe. At least, the recent sale of that painting suggests that’s the case.

In early May 2022, Warhol’s Marilyn Monroe painting went up for sale at Christie’s Auction House in New York. Christie’s suggested ahead of the auction that the painting had an approximate value of $200 million.

They weren’t far wrong as the winning bidder got the artwork for $170 million, which rises to $195 million when taxes and auction fees are accounted for. That hefty fee makes Warhol’s portrait the most expensive piece of 20th-century art in the world.

You’re probably wondering why we’re telling you this.

The reason being, this sale may affect the share prices of some of the world’s most famous auction houses.

This article examines what effect, if any, we can expect such an enormous sale to have on Christie’s and one of its biggest competitors, Sotheby’s.

The Situation With Christie’s

Data from The Financial Times seems to suggest that the sale of this painting will have little direct effect on Christie’s stock prices.

The outlet’s analysis shows that the group will likely experience a 16.67% dividend increase on its shares in 2022. However, this growth seems less impressive when you consider the fact that it means dividends will go from £0.03 to £0.04.

On the plus side, the sale seems to have set the stage for Christie’s to experience a forecasted 13.79% growth in earnings for 2023. Though again, the company’s shares are of a low enough value that this growth may mean little in terms of returns on investment.

The Situation With Sotheby’s

Though Sotheby’s wasn’t involved in the sale of the Warhol painting, some may assume that they could potentially invest in the company in anticipation of future large sales.

That isn’t the case.

Sotheby’s ceased trading publicly in October 2019 following its acquisition by the French-Israeli billionaire Patrick Drahi. This reverted the firm to private ownership after it had spent 31 years trading publicly on the New York Stock Exchange.

As such, investors aren’t in a position to buy stocks or profit in any way from the potential auction house industry growth that may result from the sale of Warhol’s Marilyn Monroe portrait.

Frankly, the sale of Warhol’s portrait, though impressive, seems unlikely to affect Christie’s stock prices too much. And as many auction houses are privately owned, the sale may not have a huge effect on auction house stocks in general.

However, it may have an impact on the value of art going forward.

The $195 million sale of a 20th-century piece of art creates a new milestone in the art investing world.

This milestone may encourage other art sellers to command higher prices for pieces they bring to auction. In a roundabout way, this may also affect the stock performance of publicly-traded auction houses.

Pieces selling for more money leads to increased revenue for the auction houses that sell them. If an upward trend forms in the price of art, investors may benefit from higher stock values based on the associated auction houses higher revenue.

Unfortunately, this is all purely speculative at the moment.

The immediate figures show us that the sale of the Marilyn Monroe portrait has had a minimal impact on Christie’s stock prices.

What’s more, the assumption that one high-priced sale will lead to others is a dangerous one.

After all, paintings can only sell at auction if bidders are willing to pay the fees the auction house asks. Assuming that willingness will extend to other 20th-century pieces could result in unwise investments made based on speculation.